As the demand for iPhone and iPad apps is increasing every day, more people want to use Xcode to develop mobile apps for iOS. However, Xcode requires Mac OS and MacBooks, iMacs and other Macs are not that affordable compared to Windows PCs.

Therefore, Xcode for Windows is desirable to develop apps with Swift or Objective-C on Windows. There are some unofficial and unsupported ways to run Mac OS on PC. Please note that Smartface does not endorse such practices and they are available only for information purposes.

The first one is “hackintosh” approach, which means running Mac OS on non-Apple x86/x64 PCs by using custom kernels, kexts (drivers) and EFI bootloaders like Chameleon or Clover to load Mac OS on a Windows PC. The second approach for Mac on PC is to use virtual machines like VirtualBox or Vmware Workstation. You can run a Mac OS virtual machine.

Both approaches require a great deal of technical effort and there may be compatibility or performance issues. For instance, your graphics card or wireless adapter may lack a kext and you may be required to run your hackintosh with a low-performace generic graphics kext or without a network connection. Especially iOS simulator of Xcode may be troublesome to run.

If you are not an advanced user, this approach is not recommended just for iOS development on Windows. Moreover, Apple forbids running Mac OS on non-Apple hardware and the approaches described are directly against Apple software license.

Smartface offers a legitimate and easy solution for your Xcode for Windows worries and even offers features that are not available in Xcode.

Therefore, Smartface is like Xcode on Windows for iOS and Android development. It has a drag and drop WYSIWYG editor that is as easy as Xcode and an on-device iOS emulator on Windows just like the iOS simulator on Xcode. Both iPad and iPhone emulation can be done on Windows with a phone or tablet connected to your PC similar to Xcode on-device simulator. iOS debugging on Windows is fully supported as well, so you can test your iOS apps on Windows. 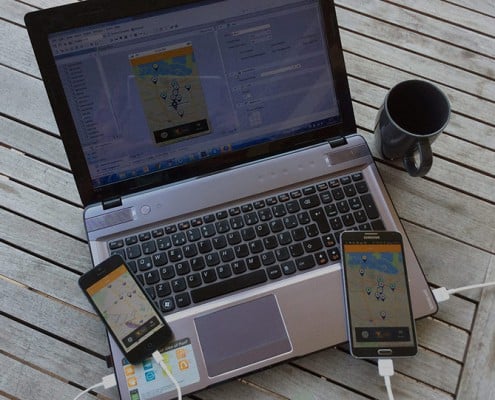 Smartface Android and iOS emulator is just like Xcode for Windows

The only point where you will require a Mac will be for the App Store submission, which takes only a couple of minutes. Due to Apple’s license restrictions, you need to sign your app on a Mac, for which you can rent a virtual Mac from the cloud for a few minutes or borrow a friend’s Mac.

Xcode may have some additional features that are still under development for Smartface, but unless Apple changes its strategy, Smartface is the one and only solution for native iOS development on Windows.